Today is the day

Procrastination is the bad habit of putting off until the day after tomorrow what should have been done the day before yesterday. 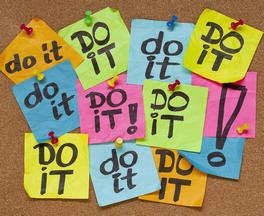 I have written lately about the barriers to accomplishment that we create in the name of perfection. I have also bemoaned the load that is created by excessive procrastination. I thought I should own up to may succumbing to the siren song of waiting as I sit here among a stack of things that must be done and a houseful of yet to be read books. It is understandable that I would know about the subjects since I am at least guilty of procrastination. As you can see if you read the Daily very often I cannot however be accused of perfectionism.

In truth I think for many of us it takes some work to get our act together. Ironically while I know what needs to be done to take the load off that is created by procrastination I also delay doing what needs to be done by finding excuses to delay; more procrastination. So today I am going to do a stack attack and at least clear part of clutter I have created. Here are some thoughts on the subject written by life coach Lori Smith that make sense to me, what about you?

What Kind of Excuses can I Come up with Today?

Myth: I don’t have the time!

Now I have made a conscious effort to get up 30 minutes early so that I have time to myself in the mornings. To me the effort to get up is very little compared to the enormous benefits I get from having my day completely organized.

The point is start something… even if the only thing you do is wake up 15 minutes early and drink your water/juice in silence while you are writing your “To Do” list for the day.

You may be a control freak or a perfectionist. You have being doing it for as long as you can remember and you probably have no clue about where to even begin to stop. But you can stop and you can move on from here.

It is not possible to change everything in one day, one week or one year even; this is a process, a journey to create a better you.

Let me tell you about the actions I took to do this.

1. I hired people around me that could take on some of my redundant tasks.

2. I started to say no to taking on additional tasks. I would simply say that I was loaded right now, but they could check back in 3 months or I would recommend an ‘up and comer’ who had promise.

It starts with just one baby step, one simple little thing, like delegating those reports.

“If you want to make an easy job seem mighty hard, just keep putting off doing it.”

A golfer enters a tournament and is assigned a caddie. On the first day, the golfer duffs a couple of key shots and does quite bad. He tries to act undisturbed about it and plays the second day, which is even worse. So he plays the third day and totally messes up every shot and has a terrible game.

So on the last day of the tournament, he goes out and tries really hard, but he just did worse and worse, so at the end of the round, swearing violently and very frustrated, he shouts to his caddie, who has been quiet all week-end, and says, “You’ve got to be the worst caddie alive!!”

The caddie thinks about this, shrugs, and replies, “Nah, that’d be too much of a coincidence!”

Does the name Pavlov ring a bell?

How to check the weather.

Get a rock from somewhere, and place it somewhere like in your yard or something!

That’s all you have to do, and your ready for forecasting!!!!!

If you don’t want to use a rock, you can use a horse, works just as well!!!

If its white —It’s Snowing

“We are living in a world today where lemonade is made from artificial flavors and furniture polish is made from real lemons.”

A door-to-door salesman approaches a nice home and asks the two kids playing in the front yard, “Are either of your parents home?”

The salesman rings the bell and waits. He rings again. Still, no one answers the door. “Why won’t they come to the door?”

I have a terrible memory. I never forget a thing.

One day I  was reading a newspaper. On page two was a picture of a famous politician and his gorgeous wife. Slightly jealous of the politician, I turned to my wife and said, “It’s unfair that the biggest jerks in the world catch the most beautiful wives.”

My wife smiled and replied, “Why, thank you dear.”

“The really happy people are those who have broken the chains of procrastination, those who find satisfaction in doing the job at hand. They’re full of eagerness, zest, productivity. You can be, too.”