Wherever you go, no matter what the weather, always bring your own sunshine. 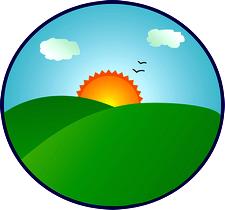 I have often been inspired by people I meet who have the ability to take on almost any task with enthusiasm. They spend little time thinking something may be too difficult to attempt rather they move on and do it.

I hope I am wrong but it seems like there is a growing propensity on the part of many people to focus on what’s wrong instead of appreciating what is right.

Here is a story that I think holds the key to happiness, I hope you do too.

I am seldom considered, though I do more to influence everything about you than virtually any one thing in your life. I often control the time you get up in the morning, the time you go to sleep, what you eat and drink and the very thought that runs through your head. I can make you either happy or sad, loving or hateful, cheerful or remorseful, congenial or spiteful and in doing so, control the very capacity that you have for success.

No, you don’t often think of me instead you BLAME the problem I create on the shortcoming of others, or the state of the economy, or your family or a million other reasons. Often at times unable to find anyone else to BLAME you look for shortcomings within yourself on which to lay the BLAME.

When my impact on your life fully is considered in your every thought and action, when you are mindful of my awesome power, when you nurture and groom me for positive use in your life, I can become more contagious than the most prolific disease ever witnessed by man. My influence will spread to every person you come in contact with.

Groomed and nurtured in a positive manner there will be no person or obstacle that can stand in the way of my success or fail to be impacted for the better.

‘I Am Your Attitude’

Everyday there will be an opportunity to Frown or to Smile, to Drown or to Dance, to be Sad or to be Glad. It’s a Choice!

The veterinarian told the her that her dog needed some exercise. “You need to make sure this dog runs around,” the doctor said.

“Try playing a game of fetch with him.”

“Why not?” the doctor asked.

A guy walks into a shoe store and asks for a pair of shoes, size 8.

The obviously well trained salesman says, “But sir, you take an 11 or eleven-and-a-half.”

“Just bring me a size eight!” the man replies.

The sales guy brings them and the man stuffs his feet into them and stands up in obvious pain. He turns to the salesman and says, “I’ve lost my house to the I.R.S., I live with my mother-in-law, my daughter ran off with my best friend, my business has filed Chapter 7, and my son just told me he was gay. The only pleasure I have left is to come home at night and take my shoes off.”

People who fight fire with fire usually end up with ashes.

My friend’s mother is a proper Southern lady and a passionate gardener who spends hours outside with her plants. In her neighborhood, where she has lived most of her life, no one has fences and every yard is open to the next.

Recently one of her longtime neighbors, an elderly man, moved away. “Are you going to miss him?” my friend asked.

“Actually I’m relieved,” her mother replied. “Now I can bend over.”

“Blessed is he who expects nothing, for he shall never be disappointed.”

Bill had always been teased by his friends that his wife was more successful than he was. Some even went so far as to insinuate that he was overshadowed by her and henpecked. Bill had a sense of humor and always laughed it off.

One day, one of his fiends asked the tiresome question AGAIN, “Who wears the pants in your family?”

Everyone seems normal….. Until you get to know them.

He said: As a senior at St. Cloud State University in Minnesota, I often engage women psychology majors in heated discussions about male-female relationships. Once, my friend Shelly and I got into a hot debate about whether men or women make the larger sacrifice of their respective gender characteristics when they get married. To my surprise, Shelly agreed with me that men give up far more than women.

“You’re right, Steve,” she said. “Men generally give up doing their cleaning, their cooking, their grocery shopping, their laundry.”

“The future belongs to those who believe in the beauty of their dreams.”

The new librarian decided that, instead of checking out children’s books by writing the names of borrowers on the book cards herself, she would have the youngsters sign their own names. She would then tell them that they were signing a “contract” for returning the books on time.

Her first customer was a second grader, who looked surprised to see a new librarian. He brought four books to the desk and shoved them across to the librarian, giving her his name as he did so.

The librarian pushed the books back and told him to sign them out. The boy laboriously printed his name on each book card and, with a look of utter disgust on his face, handed them to the librarian.

Before the librarian could even start her speech, the boy said, disdainfully, “That other librarian we had could write.”

“It isn’t what you have or who you are or where you are or what you are doing that makes you happy or unhappy. It is what you think about it.”

Do you want to be happier?

I do appreciate them