Let’s have a perfect day

Happenings in life depend on your attitude. stay positive, speak the language of heart with love, compassion and forgiveness. 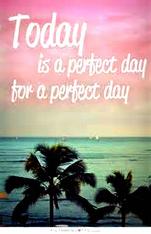 I was down yesterday with a minor illness that kept me from my morning workout at the gym and from attending a presentation by lawyer acquaintance on what might be done to reduce gun violence. As I have aged I find that each day is precious and losing one is a real downer.

The key of course is that today is a new day and one that will be as good as I wish to make it. So I plan to enjoy my day starting with a visit with a friend who pays attention to what goes on in our world and who provides me the opportunity to see things through his eyes that I might otherwise miss. I will then attend a meeting of men and women who are dedicated to helping children have happier lives. I’ll also drop of some fruit for some homeless school kids so they will have a snack later in the day.

Yep, I’m going to have a good day and to a large extent it is because I choose to have one. I have learned that our attitude is as much the key to how satisfied we are with our lives as is what goes on around us. Here is something I got a few years ago that I agree with I hope you will too.

“If you are not happy with your life or whatever happens in it, discipline your disappointments; it is not external but a result of our internal way we view, believe, and do things in the world.” The choices we make determine the quality of our lives, and whatever is happening in our lives, we use it to succeed or to fail, either it is good or bad, and it is mostly determined by our attitude.

Everything is mental; everything is a personal choice and a total responsibility of each one of us. Our attitude is the reason to do the necessary changes or the reason to blame others for our poor performances, for our mistakes or for our ignorance in certain topics.

The moment we take responsibility for our life, our life will definitely change. Take action now; there is no such thing as the perfect time or right moment. Choose to be happy, nothing is more important than feeling good. Life is too short – VERY, VERY SHORT. Don’t let the opportunities and blessings of life fly from your hands.

Wishing you a fulfilled life,

“Don’t judge each day by the harvest you reap, but by the seeds you plant.”

A guy was on trial for murder and if convicted, would get the electric chair. His brother found out that a redneck was on the jury and figured he would be the one to bribe. He told the redneck that he would be paid $10,000 if he could convince the rest of the jury to reduce the charge to manslaughter.

The jury was out an entire week and returned with a verdict of manslaughter.

After the trial, the brother went to the redneck’s home, told him what a great job he had done and paid him the $10,000.

The redneck replied that it wasn’t easy to convince the rest of the jury to change the charge to manslaughter. They all wanted to let him go.

“Just because nobody complains doesn’t mean all parachutes are perfect.”

Scientists were excited this week at having isolated a brief sound which occurred immediately before the Big Bang. Apparently, that sound was “uh oh.”

One Sunday morning an old biker entered a church just before services were to begin. Although the old man and his clothes were spotlessly clean, he wore jeans, a denim shirt and boots that were very worn and ragged. In his hand he carried a worn out old leather jacket and an equally worn out bible.

The church he entered was in a very upscale and exclusive part of the city. It was  the largest and most beautiful church  the old biker had ever seen. The people of the congregation were all dressed with expensive clothes and accessories.  As the biker took a seat, the others moved away from him. No one greeted, spoke to, or welcomed him. They were all appalled at his appearance and did not attempt to hide it.

The preacher gave a long sermon about Hellfire and brimstone and a stern lecture on how much money the church needed to do God’s work. As the old biker was leaving the church, the preacher approached him and asked the biker to do him a favor. “Before you come back in here again, have a talk with God and ask him what He thinks would be appropriate attire for worship.”

The old biker assured the preacher he would.

The next Sunday, he showed back up for the services wearing the same ragged jeans, shirt, boots, and leather jacket. Once again he was completely shunned and ignored.

The preacher approached the man and said, “I thought I asked you to speak to God before you came back t o our church.”

“If you spoke to God, what did he tell you the proper attire should be for worshiping in here?”  asked the preacher.

“Well, sir, God told me that He didn’t have a clue what I should wear. He says He’s never been here before.”

It was moving day. The previous owners were going to finish moving out that morning, and we were going to start moving in that afternoon.

We showed up just as they were finishing up, around lunchtime. The couple was sitting down for a breather before they left, The wife suggested to her husband that they go to McDonald’s for lunch. She told us with guilty pleasure, “I know it’s not good for me, but I just love burgers and fries.” Her husband had a somewhat disgusted look on his face. He told us, in all seriousness, “Not me. I’m a meat and potatoes man.”

“The Law of Self Sacrifice” When you starve with a tiger, the tiger starves last.

A faith healer asked Moshe how his family was getting along. “They’re all fine,” Moshe said, “Except my uncle. He’s very sick.”

“Your uncle is not sick,” the faith healer said. “He THINKS he’s sick.”

Two weeks later, the faith healer ran into Moshe on the street. “How is your uncle getting along?” he asked.

“Forget mistakes. Forget failure. Forget everything except what you’re going to do now and do it. Today is your lucky day.”

I appreciate anything you can do