Nothing is so fatiguing as the eternal hanging on of an uncompleted task. 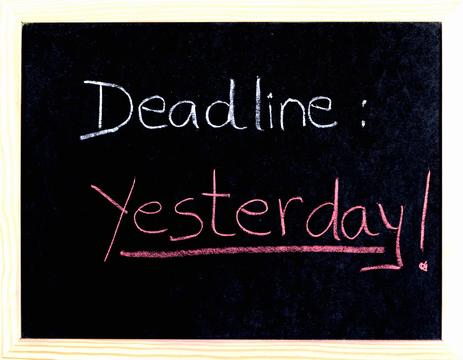 It’s has been somewhat of a challenging weekend. In the old days I lived year to year these days’ time moves so fast that I now live one day at a time. This weekend I had to fulfill a promise of composing a document for a worthy organization and I had a really hard time getting started. There is more things I should be doing but I keep delaying any action.

I seem to have left my verve somewhere and I can’t find it. I plan on looking again today after I drag myself to the gym for my mandatory rehab exercises. At least I will be rewarded with a breakfast with a good friend. In the meantime I’ll get to the other stuff tomorrow.

As I was searching for my verve yesterday I ran across these suggestions which I plan on following day after tomorrow.

Six easy steps you can take to completely eliminate procrastination.

And remove the feelings of guilt and stress that come with it.

Yet, there are just some tasks that you dislike doing that you determined would be best for you to perform yourself, because not doing so would create worse consequences. We face many of these every day. Using the 4 discipline based steps below will not only make it much easier, but will maximize your positive results.

It is an undoubted truth, that the less one has to do, the less time one finds to do it in.

Watching her mother as she tried on her new fur coat, young Lora said unhappily, “Mom, do you realize some poor dumb beast suffered so you could have that?”

The woman shot her an angry look, “Lora, how dare you talk about your father like that!”

Nowadays, when Granny sits at the spinning wheel, chances are she’s at the casino.

I was carpooling with my friend Craig, he noticed that the “Check oil” light was on. He pulled into the gas station, got out of the car, opened the hood, checked the engine oil, closed the hood, then got back into the car. “Can we make a quick stop?” He asked.

“I need to stop by the auto parts place to get a longer dipstick?”

“What do you need a longer one for?” I enquired.

“Because the one I got isn’t long enough to reach the oil!”

A man who correctly guesses a woman’s age may be smart but he’s not very bright.

A friend of mine, a catering manager, lacks certain social skills–like knowing when to keep her mouth shut! While discussing a baby christening party with a young couple, she told the mother, “You look like you’ve lost most of your pregnancy weight.”

“Thanks,” came the clenched-teeth reply. We adopted.”

“Everybody keeps saying that women are smarter than men, but did you ever see a man wearing a shirt that buttons down the back?”

A woman meant to call a record store, but dialed the wrong number and got a private home instead. “Do you have ‘Eyes of Blue’ and ‘A Love Supreme?'” she asked.

“Well, no,” answered the puzzled homeowner. “But I have a wife and eleven children.”

“Is that a record?” she inquired, puzzled in her turn.

A diplomat is a person who can tell you to go to hell in such a way that you actually look forward to the trip.

A guy is at the pearly gates, waiting to be admitted, while St. Peter is leafing through the big book to see if the guy is worthy of entering. Saint Peter goes through the book several times, furrows his brow, and says to the guy, “You know, I can’t see that you did anything really good in your life, but, you never did anything bad either. Tell you what, if you can tell me of one REALLY good deed that you did in your life, you’re in.”

The guy thinks for a moment and says, “Well, there was the time when I was driving down the highway and I saw a group of biker guys gathered around this poor girl. I slowed down my car to see what was going on, and sure enough, there were about 20 of ’em tormenting this girl.” “Infuriated, I got out my car, grabbed a tire iron out of my trunk, and walked straight up to the leader of the gang, a huge guy with a studded leather jacket and a chain running from his nose to his ear. As I walked up to the leader, the gang formed a circle around me. So, I ripped the leader’s chain off his face and smashed him over the head with the tire iron. Then I turned around and yelled to the rest of them, ‘Leave this poor, innocent girl alone! You’re all a bunch of sick, deranged animals! Go home before I teach you all a lesson in pain!'”

St. Peter, impressed, says, “Really? When did this happen?”

“Oh, about two minutes ago.”

My childhood was rough. Once for my birthday my old man gave me a bat. The first day I played with it, it flew away.

Cecil and Morris are walking to services and Cecil asks, “I wonder whether it would be all right to smoke while praying?”

“Why don’t you ask the rabbi?” says Morris.

Cecil sees Rabbi Golden and asks, “Rabbi, is it permissible for me to smoke while I pray?”

“No, you may not. That’s utter disrespect to our religion and traditions!” quickly answers the rabbi.

Cecil goes back to his friend and tells him what the good Rabbi told him.

“I’m not surprised. You asked the wrong question. Let me try.”

Morris goes over to the rabbi and asks, “Rabbi, will it be ok if I pray while I smoke?”

To which Rabbi Golden eagerly replies, “By all means, my good man. By all means.”

To think too long about doing a thing often becomes its undoing.