“Life is full of beauty. Notice it. Notice the bumble bee, the small child, and the smiling faces. Smell the rain, and feel the wind. Live your life to the fullest potential, and fight for your dreams.” 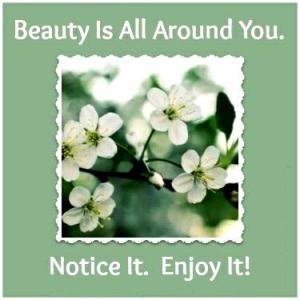 I am moving a little slow right now so I am going to make this a long weekend and am sending you another classic Daily from out of the past. Have a great weekend and I’ll be back Monday.

I told you yesterday about the effort being made to buy out all the homeowners in my condominium complex. I was sharing the same information with a friend later in the day and his response was “Of course you are going to take it even if it is only twice what your house is worth, aren’t you?” He was shocked when I said we had no interest in doing so. He said, “But think of all the money, you could buy a luxury car, bank hundreds of thousands of dollars,” and so on.

He did not appreciate the fact that the quality of our lives does not depend on what we have but rather on what we have means to us. My current car gets me where I want to go and does it very well, a luxury car would only be an unneeded luxury that at best would only impress others. While we don’t have an excess of money we have enough to maintain a more than satisfactory life style. That lifestyle is as good as it is due in no small part to where we live. Our complex is about 30 acres on two beautiful lakes. We have wonderful amenities, no public access, it is quiet and country like. Our neighborhood is warm and tranquil, with flora and fauna that is seldom found in a city as dynamic as Indianapolis. And you know what? Our cities finest shopping centers are but minutes away, as are movie and art theatres, fabulous restaurants, book stores, coffee shops, and just but anything anyone would ever want.

Having more money in the bank is a huge price to pay when I think about all we would have given up for the years ahead. Satisfaction comes from what you have around you, the people you care about, and your ability to place value on the really important things. We may end up having to move if all or neighbors decide to sell, if we do the developers are going to have to pay a lot of money, for we will have sold not just our home, we will have sold our way of life.

You already know but just as reminder. Don’t look and envy what you don’t have, rather take inventory and place value in what you do have. It is true what they say, money won’t buy happiness.

You can never get enough of what you don’t need to make you happy.

Upon arriving home, a husband was met at the door by his sobbing wife. Tearfully she explained, “It’s the druggist. He insulted me terribly this morning on the phone. I had to call multiple times before he would even answer the phone.”

Immediately, the husband drove downtown to confront the druggist and demand an apology. Before he could say more than a word or two, the druggist told him, “Now, just a minute, listen to my side of it. This morning the alarm failed to go off, so I was late getting up. I went without breakfast and hurried out to the car, just to realize that I had locked the house with both house and car keys inside and had to break a window to get my keys. Then, driving a little too fast, I got a speeding ticket. Later, when I was about three blocks from the store, I had a flat tire. When I finally got to the store a bunch of people were waiting for me to open up. I got the store opened and started waiting on these people, and all the time the darn phone was ringing off the hook. “Then I had to break a roll of nickels against the cash register drawer to make change, and they spilled all over the floor. I had to get down on my hands and knees to pick up the nickels and the phone was still ringing. When I came up I cracked my head on the open cash drawer, which made me stagger back against a showcase with a bunch of perfume bottles on it. Half of them hit the floor and broke.

Meanwhile, the phone is still ringing with no let up, and I finally got back to answer it. It was your wife. She wanted to know how to use a rectal thermometer.

“And believe me mister, as God is my witness, all I did was tell her.”

I told my girlfriend last night how much I loved her, and she said that I must have been out drinking again. I asked her why she would say that, and she said, ‘Because I’m your father.’

* Maybe it’s true that life begins at fifty. But everything else is starting to wear out, fall out, or spread out.

* There are three signs of old age. The first is your loss of memory. I forget the other two.

* You’re getting old when you don’t care where your spouse goes, just as long as you don’t have to go along.

* Middle age is when work is a lot less fun — and fun is a lot more work.

* Statistics show that at the age of seventy, there are five women to every man. Now isn’t that a great time for a guy to get those kind of odds?

* You know you’re getting on in years when the girls at the office start confiding in you.

* Middle age is when it takes longer to rest than to get tired.

* By the time a man is wise enough to watch his step, he’s too old to go anywhere.

* Middle age is when you have stopped growing at both ends, and have begun to grow in the middle.

* A man has reached middle age when he is cautioned to slow down by his doctor instead of by the police.

* You know you’re into middle age when you realize that caution is the only thing you care to exercise.

* You’re getting old when you’re sitting in a rocker and you can’t get it started.

* You’re getting old when you wake up with that morning-after feeling, and you didn’t do anything the night before!

* The cardiologist’s diet: if it tastes good, spit it out.

* It’s hard to be nostalgic when you can’t remember anything.

* When you lean over to pick something up off the floor, you ask yourself if there is anything else you need to do while you are down there.

* You find yourself in the middle of the stairway, and you can’t remember if you were downstairs going up or upstairs going down.

It takes only one drink to get me drunk. The trouble is, I can’t remember if it’s the thirteenth or the fourteenth.

After buying her kids a pet hamster, after they PROMISED they would take care of it, Mom, as usual, ended up with the responsibility.

One evening, exasperated, she asked them, “How many times do you think that hamster would have died if I hadn’t looked after it?”

After a moment, her 5-year-old son replied quizzically, “Er…. Once?”

The salesman reported back to his boss after several weeks on the road and said, “All I got was two orders.”

“What were they? Anything good?”

I have learned to seek my happiness by limiting my desires, rather than in attempting to satisfy them.

Are you ready for the unexpected?