My Plimsoll line is below water 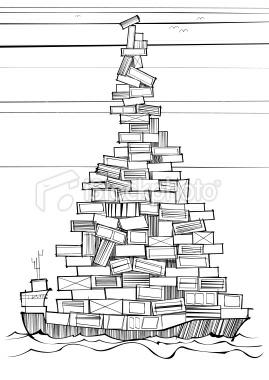 It has been a challenging week so far. I continue with tests; another in a few hours, there is nothing to worry about but they are time consuming. The other night I was going to an African/Caribbean dinner with the Council on World Affairs that I was looking forward to attending and could not find the restaurant. I went to one of my medical appointments at the wrong time and yesterday while out of town my wife fell and got banged up pretty good.

We did not get home last night until very late so I overslept this morning and missed my daily workout for the second day in a row. I have more than 300 e-mails backed up and a full schedule for today. Worst of all is not getting as much done as I should in some of my organizational roles. I again find myself committed to more than I can handle. Since I am running behind this morning I am sending you a reprint that talks about the Plimsoll line, I need to heed its advice.

I had lunch yesterday with one of my medico friends where the conversation turned to the loads some people take on. She, like so many others I know, epitomizes the old adage, “if you want it done, ask a busy person.” One of the traits I notice in so many of my friends is their almost total inability to say no. These are good people who take on unbelievable workloads, sometimes taking them to the point that something has to give. Yesterday we talked about coping skills when we should have talked about how well we balance the load. She said that she wished she had time to put her feet up on her patio, sit back, and enjoy a Martini or two, but there was no time, there was too much to be done.

You know, each of us has our own Plimsoll line, (the line on the side of a merchant ship indicating the limit to which it can be safely loaded). When we become loaded to the point that our Plimsoll line is below water we are overloaded to the point that something has to give, often creating personal anguish. When we become loaded to exactly our Plimsoll line we must use all our self-discipline and our coping skills just to stay on track, often leaving no time for ourselves.

It is not just a question of knowing when to say no, it is also a question of taking responsibility for doing things for you. When you start to load your ship, put something on for you first. This is not a selfish act, it is the insurance we all need to be both effective and to have time to enjoy life. I honestly believe that those that do, get more done, enjoy life more, and are seldom overwhelmed by their opportunities for service.

So when you start to reach your Plimsoll line, stop loading more cargo and say no, or off load something to make room for something else. If you do your ship will stay afloat while you enjoy the journey.

“Twenty years from now you will be more disappointed by the things you didn’t do than by the ones you did. So throw off the bowlines. Sail away from the safe harbor. Catch the trade winds in your sails. Explore. Dream. Discover.”

A large two engine train was crossing America. After they had gone some distance one of the engines broke down. “No problem,” the engineer thought, and carried on at half-power.

Further on down the line, the other engine broke down, and the train came to a standstill. The engineer decided he should inform the passengers about why the train had stopped, and made the following announcement:

I really do value my friends and their support, as an example Jane sent me this.

You and I are Friends…….

You Jump Off a Bridge….

She said: I’ve missed you… I’ll aim better next time!

A prisoner in jail receives a letter from his wife: “I have decided to plant some vegetables in the back garden. When is the best time to plant them?”

The prisoner, knowing that the prison guards read all mail, replied in a letter, “Dear wife, whatever you do, do not touch the back garden. That is where I hid all the money.”

A week or so later, he received another letter from his wife: “You won’t believe what happened, some men came with shovels to the house, and dug up all the back garden.”

The prisoner wrote another letter: “Dear wife, now is the best time to plant the vegetables.”

Being happy doesn’t mean everything’s perfect. It means you’ve decided to see beyond the imperfections.

A friend of mine is responsible for alumni relations at his high-school alma mater. Last fall, a member of the Class of 1986 returned the standard alumni questionnaire with this response:

There’s nothing worse than a snotty doctor’s receptionist who insists you tell her what is wrong in a room full of other patients. I know we all have experienced this, and I love the way this old guy handled it. An 86 year old man walked into a crowded doctor’s office. As he approached the desk, the receptionist said, “Yes sir, what are you seeing the doctor for today?”

“There’s something wrong with my penis,” he replied.

The receptionist became irritated and said, “You shouldn’t come into a crowded office and say things like that.”

“Why not? You asked me what was wrong and I told you,” he said.

The receptionist replied, “You’ve obviously caused some embarrassment in this room full of people. You should have said there is something wrong with your ear or something and then discussed the problem further with the doctor in private.”

The man walked out, waited several minutes and then re-entered. The receptionist smiled smugly and asked, “Yes?”

“There’s something wrong with my ear,” he stated.

The receptionist nodded approvingly and smiled, knowing he had taken her advice. “And what is wrong with your ear, Sir?”

The doctor’s office erupted in laughter.

“Sometimes the fool who rushes in gets the job done.”

Stan was having problems in English class, so his teacher decided to stop by on her way home to speak with his parents. When she rang the bell, Stan answered.

“I’d like to talk to your mother or father,” she said.

“Beats me,” he replied, “but dad sure was mad that they had t’go bail her out again!”

Something has to give